(Cats are listed in pairs. We hope to have each pair adopted together.) 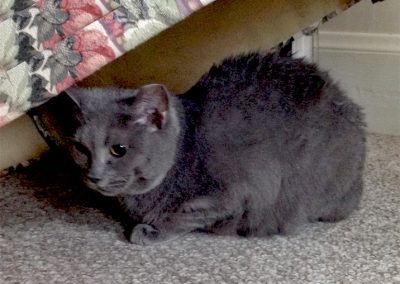 Katrina and Kennedy were rescued from a colony in Waltham. We are assuming they were littermates and are about 12 years old. Both were found with tipped ears indicating that when they were homeless they were trapped, neutered, and then released. If Katrina and Kennedy were adopted together, and one had time to work with them, the cats may become more social. We think an ideal home would be one where they could live out their years as the only cats in residence. Katrina is a very timid girl. She is a domestic, short-haired female, gray in color, with a white spot on her chest. She will probably never be a lap cat. At her October 2020 vet visit, she had a few mats shaved, and was found to be in very good health. 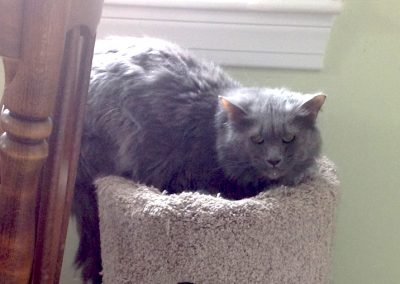 Kennedy is a gray, long-haired male, in good health. He is tame but shy, and his social skills are lacking. A dedicated adopter could bring him out of his shell. We have learned from experience that a cat may go into a new living situation and will surprise us by adapting in ways we never expected. A once-shy cat may suddenly become Mr. or Ms. Personality if circumstances encourage trust. 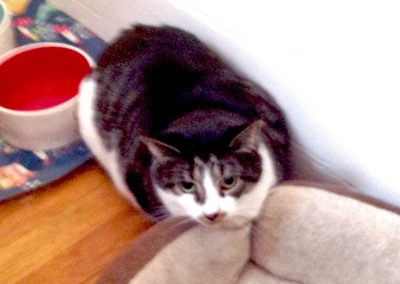 Hector and Howie are brothers who were rescued along with their mother and several other littermates. We believe they are about 11 years old. They get along well with each other and are often found sleeping together. Hector has a mind of his own. He’ll play with his foster mother, let her pat him, or join her on the sofa, but only when he is ready. 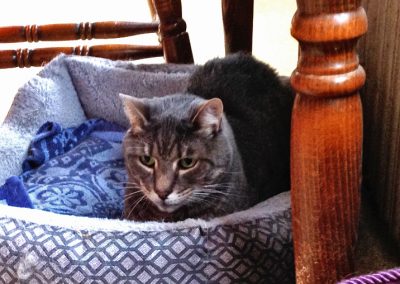 Howie is a domestic, short-haired, gray tiger with a white nose. He prefers not to be held or petted as he is very shy. However, his shyness does not prevent him from playing and spending enjoyable time with Hector. 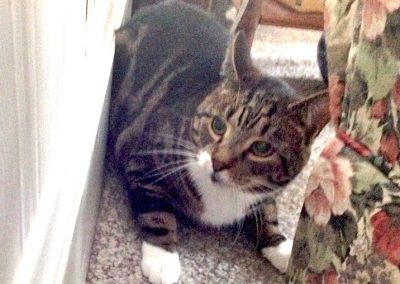 Hunter and Herb are a pair of male litter mates and are about 11 years old. They are a good pair as the outgoing Hunter looks out for the shy Herb. They seem to have developed a buddy system and are most comfortable when together. Hunter will often join his foster mother on the sofa and loves to get pats, belly rubs, and head bumps, but only if he initiates the contact. He does not like to be picked up. He does interact with people and other cats, but everything must be on his terms, in a friendly way. Hunter is a short-haired, marble tiger with a white nose, chest, and feet. 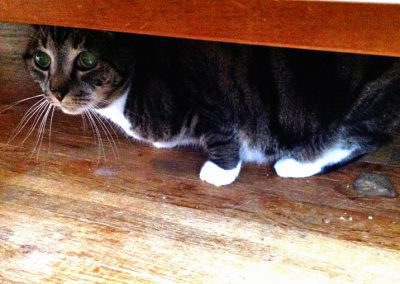 Even though Herb is very shy, he is always out and about in his foster home and does not tend to hide. He interacts with other cats, but generally avoids people. Herb does come running when he knows that treats are being served, but he shies away from being picked up or petted. An ideal home for Herb would be one where he could receive some undivided attention without competition from other cats, all while knowing that his protector brother, Hunter, is still by his side. Herb is a domestic, short-haired, marble tiger with white on his chest.

How You Can Help

Provide a temporary home for cats for which the shelter may not be the best environment. Great for those who can help out short-term.

Help us provide 365 days of loving care to our cats. Volunteers help us expand services so we can impact more cats and save more lives.

Your donation goes directly to saving cats that have been abandoned, neglected or abused. Help us care for more cats in need.

Foster Parents Must be 21 Years of Age or Older

Foster Parents Must be 21 Years Old or Older

Volunteers Must be 21 Years of Age or Older

As an all-volunteer organization with definite plans to expand, we are always looking for more caring people to help us fulfill our mission.

We are Looking for Volunteers in the Following Areas:

Responsibilities vary, but typically include:

Note: Generally there are at least two volunteers covering each shift, so at times those on site will need to discuss and divvy up tasks

Volunteers Must be 21 Years Old or Older

Help Us Protect and Care for More Cats by Giving Today

Note: Upon submission of this form, you will be redirected to PayPal’s secure payment portal to complete your transaction. Upon completion of your donation, you will receive an email with the details of your donation, which may be used as a receipt for tax purposes.

Other Ways You Can Support Eva’s Kitties 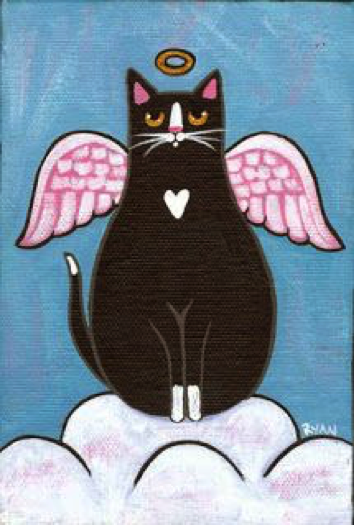 *We are grateful to Cat Folk Artist, Ryan Connors, for giving us permission to use one of her paintings. You can find more of her lovely art work at kilkennycat.wordpress.com.

How to Make Your Recurring Cat Archangel Donation

Mama is one of our older cats, brought to us when her caretaker entered a long-term care facility.  Mama loves to greet people who come to visit, and she makes the rounds in the room to be sure to give everyone a chance to pet her and experience her love. 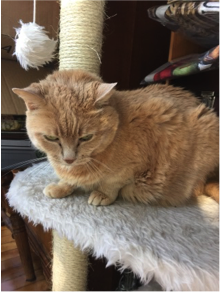 Recently, we had a scare when we noticed her breathing seemed labored.  A trip to the veterinarian resulted in tests that revealed that her heart has difficulty pumping blood to the rest of her body, a condition requiring her to be on heart medication for the rest of her life

Mama is also being treated for other conditions that occur in older cats. This may sound like a huge burden for a cat, but Mama is a truly amazing cat.  She is happy and active, and she hopes to continue to live for a long time in her foster home with her adoring humans and with her three cat roommates. Mama is looking for a special person or persons to sponsor her to help pay for her medical expenses.  If Mama’s story touches your heart, please consider becoming a sponsor for this wonderful cat.

Tracey is an 11 year old mellow, orange tabby who is one of favorite of volunteers at Eva’s Kitties.  It took him some time to come out of his shyness, but now he has his favorite spots in the cat trees and cubbies we provide.  Tracey is not much of a player.  His favorite activity is napping in his large, fuzzy bed or curled up in a cozy cubby or a cat tree near some of his lady friends.  It could be his gorgeous orange locks or maybe his calming, sweet personality that make him irresistible to the ladies.  Whatever it is, he has quite the harem of beautiful felines wanting to spend time near him. 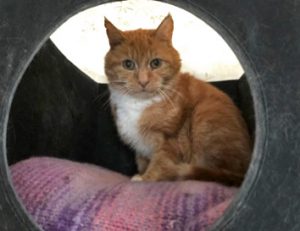 About two years ago, Tracy’s medical challenges revealed that he suffers from inflammatory bowel disease.  Currently the medicines he takes daily help slow down the progression of the disease and appear to relieve his symptoms.

Despite his troubles, Tracey is a happy cat, and he loves to be petted and brushed.  Due to his advanced medical condition, Tracey is not up for adoption.  We feel that he will have the best quality of life if he remains in his current foster home where he receives lots of attention from his human friends as well as his feline companions.  But if you are interested in becoming a sponsor for Tracey, your donation will help to cover the cost of his medications and his vet visits.

Maisie is a 17 year old orange tabby girl who lives in a foster home with her mother Mama. She has two sisters the same age who found their forever home last summer. 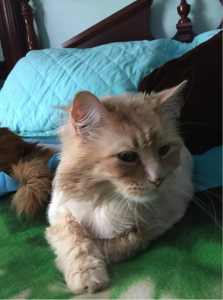 Maisie has very long fur, and she likes to sport a lion cut in the warmer months. It helps to keep her fur from becoming tangled. Her foster dad calls her Amazing Maisie.

Maisie has brain cancer, and as a result, she suffers from seizures. Maisie requires multiple doses of medication daily in the treatment of her illness. She also needs to have her blood levels monitored regularly. She is looking for a loving person to sponsor her to help with the cost of her treatments. Please consider sponsoring Maisie.

Complete the form below or contact us at info@evaskitties.org

Get our email Newsletter delivered to your inbox.

A nurse by profession, Eva Miler has provided a safe haven for rescued cats for close to 20 years.

She has nurtured and cared for these cats on a daily base – including providing medical care – while serving as a resource to potential adopters to match them with cats that are perfect for them.

In honor of Eva’s dedication, we hope to open a shelter bearing the name “Eva’s Kitties” in the near future.

As our logo says, our cats give her care a “Purrfect” rating!